We meet outside Macdonald's in Orpington on a cold, windy, drizzly Saturday morning. Still, it's encouraging to see so many people on today's walk – there are nine of us, and the weather forecast earlier promised that it would brighten up later this morning, so here's hoping that they've got it right. We have a new member (Frances) walking with us today as well, so let's hope that the weather improves and makes for an enjoyable first 'plums walk' for her.

We catch a bus to Green Street Green, and walk along a few residential roads until we reach Chelsfield Station, and a short distance beyond that we leave the road and walk along a footpath across a field, heading towards a shingle-clad church spire. The Church is St Martin of Tours. A bit of Googling has revealed the following about that saintly person: "Martin of Tours was Bishop of Tours, whose shrine in France became a famous stopping-point for pilgrims on the road to Santiago de Compostela in Spain. He has become one of the most familiar and recognisable Christian saints." Oddly enough, I've never heard of him before! Anyway, as we walk through the churchyard, with its avenues of tall and ancient lime trees, I notice a gravestone bearing the names of Vera and John Saxby, which catches my attention because it was my mother's maiden name. I'll have to ask Mum whether she knew of them.

As we leave the churchyard there is a plaque outside a large house next door that tells of a previous resident by the name of Brass Cosby. He was the Member of Parliament who was responsible for the introduction of parliamentary debate – hence the term "Bold as Brass!"

A sign on another garden fence politely asks us to make a detour around the outside of the back garden rather than following the public footpath across it. A bit cheeky, but no hardship I suppose. At the rear of this particular garden there is a small orchard of very ancient fruit trees planted regimentally in rows. By examining the black, withered fruit hanging from some of the boughs we deduce that these are probably plum trees (how appropriate!).

Down a hill, and up a hill, I'm certainly not feeling cold, in fact I've put too many layers on and I'm in danger of melting! We come to a paddock occupied by three horses, and a little Shetland pony. They are all quite frisky, and enjoying a good old gallop around the paddock while we watch them and listen to the thunder of their hooves. A bit further on we descend a slope and reach a very pleasant village green with an old pub, The Bulls Head', at its edge. I ask Keith where we are, and Ray points out the sign on the village green which proclaims the place to be 'Pratts Bottom'. Ah – I missed that one! 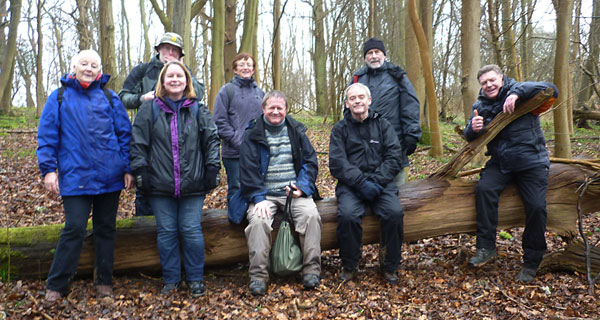 Up another hill, and we reach a large old rambling farm house with even older outbuildings that looks as though it was in the process of being restored a few years ago, when the money ran out. The big pair of closed iron gates bear a name that suggests that it was a stud farm. Further on we walk over a cattle grid and past a sign that tells us that we are entering a police dog training facility, and we are soon the centre of attention for half a dozen Alsatian dogs who are barking loudly as we pass their fenced paddock. I reckon that the barking is all for show though, because if they wanted to any of them could clear the five foot high fence with one leap, yet they don't try. There's a large open fronted barn on our left just beyond the paddock with about a dozen campervans parked inside in a neat row. Well this is certainly a secure site for over-wintering your campervan. A would-be thief wouldn't get within sight of them without a canine crescendo announcing his presence! On the right of us there's a really posh looking tree house, which puts me in mind of a recent TV advert (though for what product I can't recall).

We walk through another field, down into a steep sided valley, and up the other side, over a stile and into a wood where there's some shelter from the wind borne drizzle that shows little sign of clearing so far. There's a convenient felled tree or two for some of us to sit on so we take a break here and eat some of our sandwiches. Suddenly there's a horse whinnying loudly somewhere very close by. There it is again. I look around me, but cannot see a horse - it turns out to be the ring tone on Cathy's phone. Well, it certainly had me fooled!

Refreshed and rested, we walk on through the woods, down more hills and up more hills, and past more paddocks with horses, and back gardens with chickens, but there's no sign of the sky brightening yet. We reach a recreation ground and head across it towards the church because where there's a church there's usually a pub (or at least there once was a pub!). As we walk through the churchyard there are a couple of enormous yew trees that must be several hundreds of years old, maybe even a thousand years. Robert measures the girth of one of them by going round the tree and hugging it' – the tree's ancient gnarled trunk is about thirty feet in circumference – so about ten feet in diameter. Apparently your arm-span is roughly equivalent to your height so no need for a tape measure! I also notice the gravestone of a soldier in the Royal Army Service Corps, who made the ultimate sacrifice for King and Country on the 4th November 1918, aged just eighteen – just one week before the end of the great war. How sad. 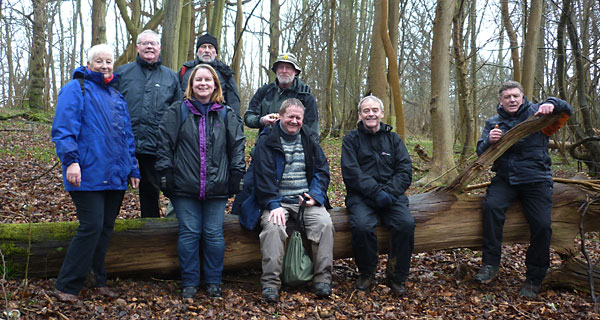 A short walk along the lane from the church brings us to the village pub The Blacksmith's Arms', Cudham. The pub displays a blue plaque on its front wall telling that this was the birthplace of Victorian music hall star Little Titch'. At the rear of the pub there is a very plush smokers' shelter, enclosed on three sides, and with upholstered seats and a cast iron pot-belly' stove at the far end (though today it isn't alight). The sign above the pub door states that George and Dorothy Cole (AKA George and the Dragon') are the licensees, and that muddy boots must be removed before entering the bar. Frankly I just do not have the energy to unlace and remove my muddy boots, and I don't want to incur the wrath of the dragon (or indeed George), so I decide to stay in the smokers' shelter and eat the remainder of my bacon sandwiches. Billy stays and keeps me company.

There's a bus service from here to Green Street Green, and to be honest, if one had come along as we started to continue our walk I would have hailed it to stop for me, but Keith says that he is going to make the rest of our walk quite a direct line back to Green Street Green, so it won't be far, and so I agree to continue (who knows – out here in the sticks I could have a two hour wait for a bus anyway!). So, we walk along the lane in my favourite direction – (down-hill!) for about half a mile. The Cole brothers don't want to finish their walk this early in the day (it's only about 2 o'clock) so they leave us and head off along a road towards Downe. The rest of us continue downhill along the lane, and then along a footpath at the edge of a field, and before long we arrive at Green Street Green. It has finally stopped drizzling with rain!

We wait a few minutes for a bus to Orpington and get off near the station where we visit The Maxwell', a poshed up' pub. Inside it is warm and comfortable and dominated by a couple of TV screens showing Saturday sport. One of the locals gives up his seat so that we can all fit at a table in the corner. How kind of him. I am horrified to find that a glass of draught cola costs £2.40 - It can be hard on the pocket when you're on the wagon!
I can't help noticing one original feature that remains in this pub – the beautiful leaded windows with pebble' glass drops' that resemble a crystal chandelier, I've not seen windows like these before - they're wonderful.

Getting up to leave the pub is a bit painful, as rigor mortis seems to have set in from the waist down. Frances says that she has enjoyed the walk, and that her legs are only aching a little, so she's done very well. Keith estimates that we've walked about eight miles today.

Return to the Walking Diary »